Consumers of the World Unite 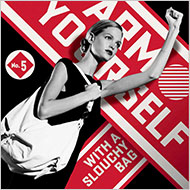 GRAPHIC APPEAL Saks Fifth Avenue has turned to Shepard Fairey, whose work captures the bold style employed by Rodchenko in the 1920s.

This is a classic example of cultural commodification, the veiled power of Capitalist hegemony; it’s ability to appropriate, absorb, and homogenize even the most anti-capitalist of art movements.